Anne Nelson is a 2005 Guggenheim fellow, a 2013 Bellagio Fellow, and a fellow at the Arnold A. Saltzman Institute of War and Peace Studies at Columbia. Anne Nelson is also a member of the New York Institute for the Humanities and the Council on Foreign Relations. A graduate of Yale University, she now teaches at Columbia’s School of International and Public Affairs (SIPA), where she focuses on how digital media may support underserved people in the world through culture, education, and public health. 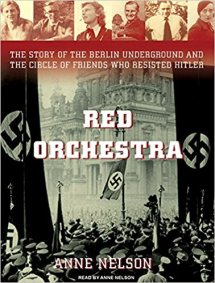 Nelson’s critically acclaimed books, Red Orchestra and Suzanne’s Children, focus on the resistance movement during World War II. She is also the author of Murder Under Two Flags: The US, Puerto Rico, and the Cerro Maravilla Cover-up. Nelson’s play “The Guys” has been produced in all fifty states, fifteen countries, and turned into a feature film. Based on her post-9/11 experiences, the play has been used to fund local fire departments, burn-treatment centers, and trauma counseling.  In the aftermath of the 9/11 attacks, Nelson led workshops with her brother, psychiatrist Daniel Nelson, with journalists and firefighters on dealing with trauma.

For this week’s Festival Spotlight Q&A
Anne Nelson speaks with Stephanie Nikolopoulos
SN: Your latest book, Suzanne’s Children: A Daring Rescue in Nazi Paris, published in October 2017, tells the true story of Suzanne Spaak, a Belgium mother who joined the Red Orchestra intelligence network and worked to save Jewish children from being sent to concentration camps during the Nazi regime in Paris. Considering her work was clandestine and she was ultimately caught, tortured, and executed, can you tell us how you conducted your research?
AN: I began my research on Suzanne Spaak online.  I found her daughter Pilette—an 80-year-old knitting instructor in Maryland—through a genealogy website.  I interviewed her a few times and felt I had come upon an important story.  Her accounts of her family’s life in Paris were almost literally unbelievable. Their friends and neighbors included the greatest cultural figures of their time: Christian Dior, Rene Magritte, Jean Cocteau, Colette. But some sessions in the Columbia Library confirmed the details, and I realized that I had an extraordinary source. Then it became a question of piecing together the resistance history in libraries, archives, and online sources, which took me over six years. I was fortunate in having access to both the Columbia Library and the New York Public Library. I also benefited from libraries and archives in France and Britain. In March the French edition of the book was launched, and the relations of many resistance figures told me that my book told the story for the first time. Throughout the research, Suzanne Spaak’s daughter was the touchstone, and she showed infinite patience in going over the material for accuracy. That said, my research turned up some details that even she didn’t know. (One of them was that her mother used their apartment in the Palais Royal for resistance meetings while she was at school!)
SN: Your book Red Orchestra (2009) describes how during Nazi Germany the media was used for both propaganda and resistance. It shows how ordinary citizens—artists and intellectuals—have the power to make a difference. One of the stories told is of a railroad worker from Detroit named John Sieg, who used a Communist underground printing press to spread the truth about the Nazis. What is the role of independent and underground press in relation to more mainstream news outlets?
AN: In Nazi Germany and Occupied Paris, the mainstream press was muzzled by censorship or politics.  In both cases, intellectuals turned to producing underground publications to disseminate the news within their limited ability. They showed great courage in doing so.  But even in less repressive periods, journalism can function with a pack mentality, and news outlets can limit reporters based on their advertising interests, etc.   A vibrant marketplace of ideas depends on a broad spectrum of information, but it also requires strong criteria, to distinguish between seriously reported information in the public interest from propaganda and commercial speech.
SN: You served as the director of the Committee to Protect Journalists and as a journalist yourself you have covered conflicts in El Salvador and Guatemala and won the Livingston Award for the best international reporting from the Philippines. As the director of the international program of the Columbia School of Journalism, you developed the first curriculum in human rights reporting. This makes me think of Austin Tice. Austin Tice is a veteran US Marine Corps officer who went to Syria during the civil war as a freelance journalist when other reporters wouldn’t go there because he believed people needed to know the truth about what was happening there. He was kidnapped on August 13, 2012, and his whereabouts remain unknown. How may journalism be both nonbiased and still a form of activism? How do we balance our need for accurate reporting with the safety of our journalists?
AN: I lost many friends and colleagues in the press corps in Central America, which gave me something of a survivor’s mission in running the Committee to Protect Journalists. There were very good days when our advocacy saved a journalist from torture or violence. There were also bad days. Central America was dangerous but Western journalists were usually respected. The war in the former Yugoslavia was worse, and there was little regard for Western journalists. The wars in Afghanistan, Iraq, and Syria have been horrific, and Western journalists have been prime targets. In each case, local journalists have been killed at a far greater rate than foreign correspondents. Freelance journalists like Austin Tice are often vulnerable because news organizations invest most of their resources on behalf of staff reporters. In some cases, kidnapped journalists have been freed through various forms of international pressure. (CPJ worked long and hard on Terry Anderson’s case, and we were overjoyed when he was liberated.)  Other cases have had other outcomes. I believe that journalism benefits from a strong sense of values, such as justice and humanitarian instinct, but it is best practiced without political activism. A journalists’ allegiance is to the truth. A good journalist is always open to changing her mind based on the evidence, and political activism doesn’t tend to work that way.
LInk here for more about Suzanne’s Children

DO YOU HAVE A STORY TO TELL?

For Hobart Festival of Women Writers 2018, Anne Nelson will present the workshop,  The Lives of Others: Interviewing Techniques for Literary Non-fiction.  This workshop will explore sensitive and productive approaches to interviewing individuals, drawing from practices ranging from journalism to psychology.  It will include discussion of permissions, tools (recordings or notes?), and editing, and will include a “hands-on” exercise in interviewing.

For the complete description of this exciting workshop, go to  Workshops