The Hobart Festival of Women Writers is very pleased to herald the return of springtime in The Catskills and to welcome the return of lifelong environmentalist and longtime community activist, Leslie T. Sharpe as a Participating Writer for Festival 2018. Sharpe’s book, The Quarry Fox and Other Critters of the Wild Catskills has recently won the IPPY Independent Publisher Book Awards Gold Medal IPPY Awards. A collection of essays chronicling the private lives of wild critters, The Quarry Fox is the first book since John Burroughs’ to look in-depth at the wildlife of the Catskills. Sharpe began her interests early. In second grade, she was president of Junior Audubon. Currently, in New York City, she is editor of the Bedford Barrow Commerce Block Association newsletter, an association which has raised over $300,000 to benefit its community. A well-known figure in the Catskills literary community, Leslie T. Sharpe is a writer, editor, and teacher. A member of PEN American Center, she is the author of the “modern editing classic” Editing Fact and Fiction: A Concise Guide to Book Editing and “On Writing Smart: Tips and Tidbits,” included in The Business of Writing. Sharpe regularly contributed to Newsday’s “Urban ‘I’” column and has also written for such publications as the Chicago Tribune, Christian Science Monitor, New York Times, San Francisco Chronicle, and The Village Voice.

Leslie T. Sharpe speaks with Stephanie Nikolopoulos about the literary landscape and the natural. 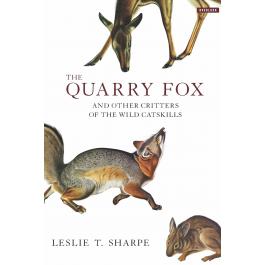 Leslie T. Sharpe will offer the workshop, SEEING NATURE IN WORDS: A Nature Writing Workshop at Hobart Festival of Women Writers 2018.
The goal of the workshop is to encourage writers to explore their own special relationship with the natural world—whether that relationship is to the Catskills or a backyard garden, expressed as a description of a single flower or as an essay probing an environmental issue—in their own true voice. – Leslie T. Sharpe
For a complete description of this workshop and all of the workshops offered at Festival of Women Writers 2018 www.hobartfestivalofwomenwriters.com

REGISTRATION OPENS ON MAY 15TH!!!

For more information: The Quarry Fox and Other Wild Critters of The Catskills