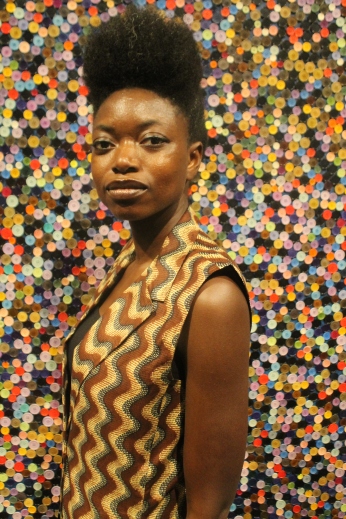 Hobart Festival of Women Writers 2018 welcomes Nana Ekua Brew-Hammond, the author of The Powder Necklace, a 2010 novel that Publisher’s Weekly called a “winning debut.” Selected in 2014 as one of the 39 most promising African writers under 39 years old, she was one of the fiction writers included in the anthology Africa39: New Writing from Africa South of Sahara. A short story of hers will also be included in the anthology Everyday People: The Color of Life, due out later this year. Brew-Hammond was shortlisted for a Miles Morland Writing Scholarship in 2014 and 2015, and her journalism has appeared in AOL, Parenting Magazine, the Village Voice, Metro, and Trace Magazine. In 2015, she was the opening speaker at TEDxAccra.
Born in the small town of Plattsburgh, New York, and raised in Queens, Nana was sent with her siblings to secondary school in Ghana. She returned to the States and was a cum laude graduate of Vassar College. Brew-Hammond is also a style & culture writer and has been published in EBONY Magazine, The Village Voice, NBC’s thegrio.com, and MadameNoire.com. She recently launched the fashion label Exit 14, which was featured on  Vogue.com .

2018 is Brew-Hammond’s first year as a Participating Writer at the Hobart Festival of Women Writers. She will offer the workshop, “The War Room: Equip Yourself & Take Necessary Action To Survive as a Writer” and will read from her work.

She is interviewed here by Stephanie Nikolopoulos for HBVFWW.

SN: Your novel Powder Necklace has a few gut-wrenching scenes that speak to our relationship with our bodies—getting periods at inopportune times, forced haircuts, and body odor. What do our bodies—particularly women’s bodies—say about our selves, our identities and the way they function in this world?
NEBH: Very early on, we are socialized to think of the female body as a commodity — the most valuable good a girl has to offer. Even those of us who are fortunate to have people in our lives who prioritized our intellectual, spiritual and emotional growth were likely told directly or via social cues to cross our legs or “cover up” or, conversely, to “flaunt it” to achieve a desired end. A crucial part of growing up as a girl is learning — and deciding — how to respond to these directives because we’ve been told that everything from getting and keeping a job to finding a mate to being respected in our communities hinges on what our bodies look like, and what we do or don’t do with our bodies. The irony is, girls are most forcefully bombarded with these messages about maintaining strict control of our bodies just when we are losing control of them i.e. sprouting breasts and strategically placed hairs, and beginning the bloody business of understanding that we will one day cede even more control of our bodies to a child, should we choose or be able to carry a baby to term.
When I was writing Powder Necklace, one of the things I was wrestling with was this idea of agency, specifically for girls and women — the tension between what we want to do and what we feel (or are told) we have to do. All children have to submit their will to the people in charge of shepherding them, which can be an incredibly frustrating reality when you’re going through it. That experience is even more complex for girls precisely because we are given this added responsibility to control our desires (along with our bodies) for our own well-being, we are told, and for the good of society itself. This weight gets heavier in adulthood with all the pressures and sacrifices we face around fertility and being “perfect” mothers. In Powder Necklace Lila and her mother are essentially dealing with what happens when the mother decides to put her needs before her child’s — even as Lila is being penalized for seeking to discover what’s on the other side of her mother’s admonitions to blunt her desires and not become a “spoiled girl.”
SN: One of the things you and I have talked about in previous conversations is being second-generation Americans whose parents returned to their countries of origin and how this has shaped our identities and, consequently, our writing. What does it mean to you to be a diaspora writer?
NEBH: For me there has been a lot of anxiety around authenticity–and ultimately rebellion. For a long time, as a writer in the diaspora, I felt this pressure to represent my culture honorably, but the question was which culture? I was born and mostly raised in New York, and my love of literature was nurtured in the black books sections of Borders and Barnes and Noble.  And I was reared by very proud Ghanaian parents, and had this identity-shifting experience of being sent from ages 12 to 15 to live and school in Ghana. I didn’t feel I could lay full claim to African-American culture or identity, and I didn’t feel completely Ghanaian either though I found myself straining to do both.
At some point, I realized that:
1. The notion of authenticity when it comes to ethnic identity (and racial identity by extension) is incredibly complicated because we are no longer living in homogenous societies closed off to people of different cultures and racial makeups. There is more intercultural and interracial mixing than ever before and even those who are “pure” are exposed to different peoples via the internet and media.
2. The notion of authenticity when it comes to racial identity is charged with more questions than answers because race itself is a construction used deliberately to disempower anyone who is not white and specifically to uphold white wealth.
3. It is not my responsibility to represent my culture honorably with my art. It is my duty to tell the truth as I know it, as best as I can.
SN: You are a freelance journalist as well as a fiction writer, whose work has appeared in various anthologies. What advice do you have for writers looking to pitch to magazines, websites, and anthologies? Do you think it helps to have a niche?
NEBH: I think it definitely helps to have a niche. If you develop a beat, you will cultivate a network of sources and build expertise over time, and as you become known for writing about a certain topic or theme, you will be top of mind when an editor is seeking a voice to cover that subject. The hope and goal is that you don’t get stuck writing only about that subject matter (unless you want to)–that as your opportunities expand, you can show what else you’re capable of. But my advice isn’t to pick a niche, my advice is to persist (through rejection and frustration and small successes and indifferent reception to your work and politics) and to go for the long shots. You never know if you’ll get a “yes” unless you pitch.
For more on Nana Ekua-Brew Hammond, visit http://www.nanabrewhammond.com and her blog https://peoplewhowrite.wordpress.com.
For information about Festival of Women Writers 2018
Hobart Festival of Women Writers
For Spotlights of all of the 2018 Participating Writers go to www.hobartfestivalofwomenwriters.blog